WELCOME TO KILLING KILLERS TRUE CRIME SITE. Browse us for breaking news, missing person alerts, unsolved crimes and cold cases. Plus explore interviews, photos, case updates and brand new evidence in our ongoing 'Smiley Face Murder' investigation. Never heard of the Smiley Face Killers before? Start here. New guests, are you investigating a loved one's suspicious disappearance and drowning? Begin with a look at the forensics of a true drowning and the complete Smiley Face Serial Killer case background. Then read in-depth interviews with families of other 'Smiley' victims, by author Eponymous Rox.

ABOUT KILLING KILLERS' BLOGGER: Eponymous Rox covers cops, curs and killers and has been featured in Crime Magazine and on NBC. The author is also a regular paid-contributor to CrimeMagazine.com, the Gather News agency and Yahoo's Associated Content. JUMP IN: The majority of cases presented on this site are unsolved so your opinion counts -- you don't need permission to start or join discussions, vote in crime polls or submit tips on Killing Killers, and can even do so anonymously if you prefer. 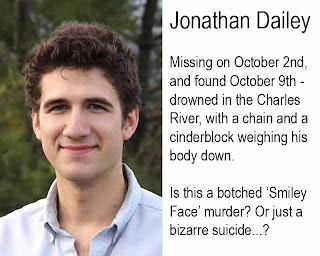 Barely a week has passed since the drowned corpse of missing grad student Jonathan Dailey was found in Boston's chilly Charles River, tethered to a chain and a cinderblock. Yet his roommate and longtime pal, Miles Smith, has already crossed off his deceased friend's name from the mailbox they both shared, and is packing up his own things, he said, with the aim of leaving town.
And the suspicious death itself still remains shrouded in mystery; the police as mum as ever about the latest fatality in this 15-year string of weird and chronic drownings.
Was young Dailey's demise a homicide? A suicide? Or a bungled 'Smiley Face' killing?
INTERESTING TIDBIT: The late Jon Dailey and his (ex)roommate Miles Smith met years ago as undergraduates at Appalachian State University in North Carolina. Why is that information so intriguing? Because ASU was recently the scene of a strange drowning event too, and only a few days before Dailey first went missing.
Police and university officals in North Carolina confirm that 19-year-old Tyler Blalock was discovered drowned in a campus creek September 29th 2012, with apparent head injuries. His death has nevertheless been ruled 'accidental'. 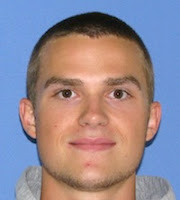 However, Blalock was an expert swimmer and a lifeguard, so his family is not entirely convinced he isn't the victim of foul play, and they also question why someone so savvy about water safety would have been at the creek at all, especially by himself.
“I know he wasn’t there alone,” his mother insisted. “I know he wouldn't have been there alone.”
Mrs. Blalock is asking the public to assist in finding the answers to what could have happened to her son the night he allegedly drowned.
“Anybody that knows anything [or] somebody that was with him last night...just come forward and talk to the police,” she pleaded through tears. “Just so I can know what happened to my baby. That's all I ask … I beg for that.”

Anyone with information regarding this tragic incident is encouraged to call the ASU Police Department at 828-262-2150.
At the time of his death, Tyler Blalock was a sophmore at Appalachian State University, Dailey's and Smith's alma mater.
Weird coincidence, eh?
Posted by Eponymous Rox at 5:56 PM 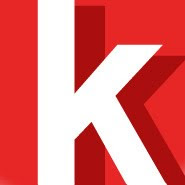 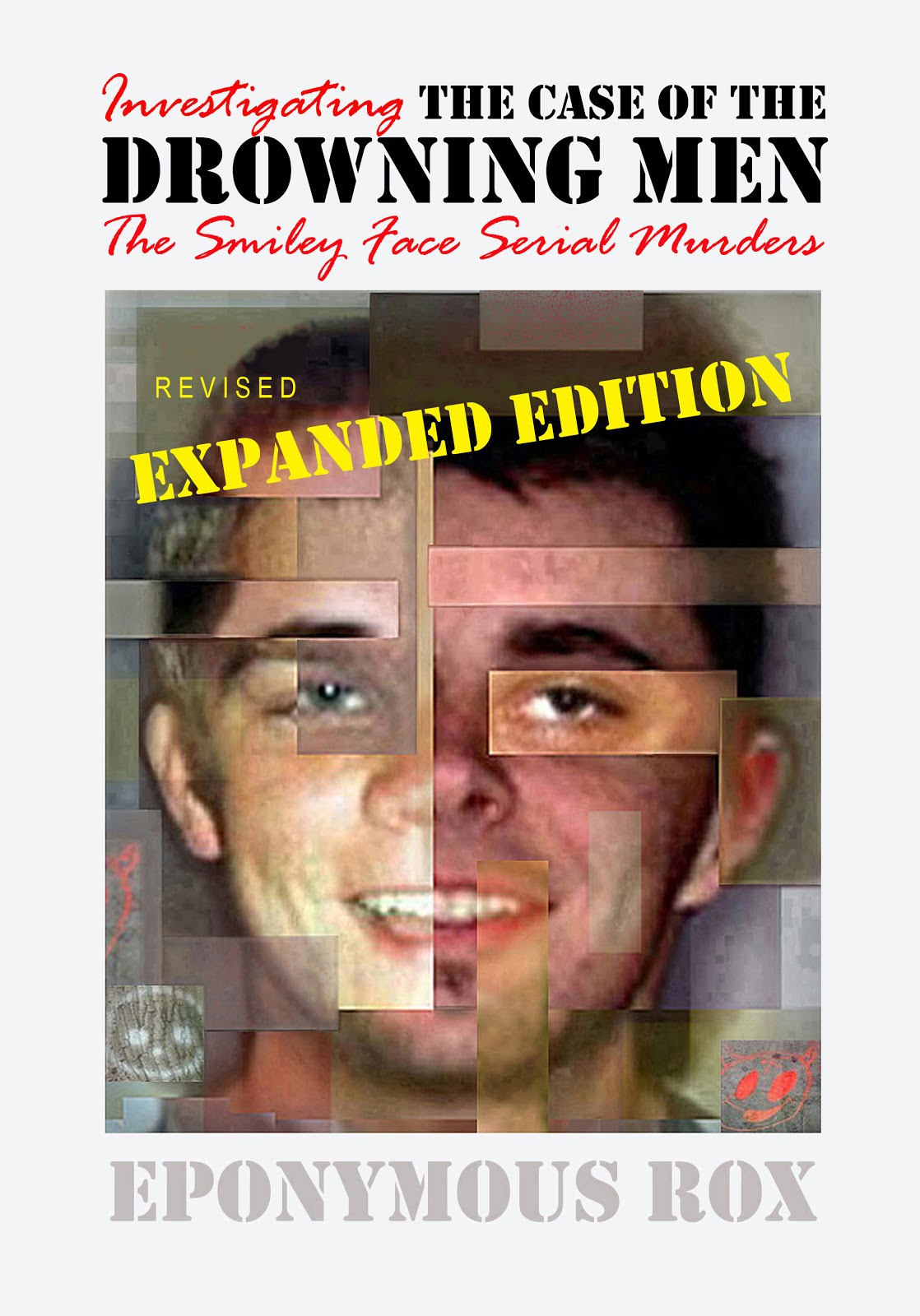 Complete guide to the 'Smiley Face Murders' controversy with photos, forensics, victim profiles and more -- It's not occult killings; it's not serial killers; it's worse.

The burned and dismembered body found stuffed inside a suitcase in Derbyshire "is not missing RAF pilot Corrie McKeague." The... 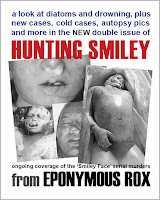 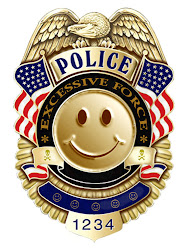 Premier print issue featuring ongoing coverage of the “Smiley Face Killers” investigation -- keep up to date on this unsolved case.

Use search box to investigate site + tag cloud below: 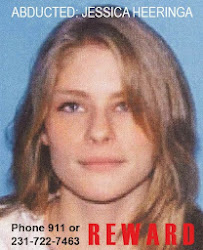 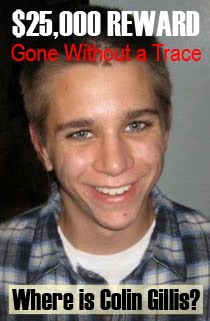 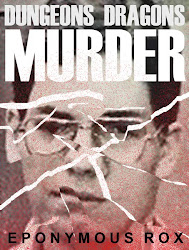 Killing is just child’s play. A game. In fact, it’s so easy, you can plan it out on a computer, if you’re smart enough. And he is smart ... see what's inside this book on Killing Killers

THE BUTCHER OF BRAINTREE 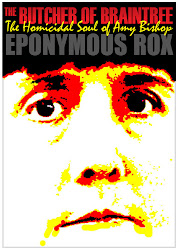 An in depth look at the life, times, and covered up crimes of mass murderer Amy Bishop - see what's inside this book on Killing Killers 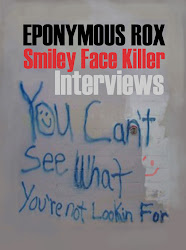 VOICES FOR THE DEAD: Read exclusive interviews here with survivors and families for FREE 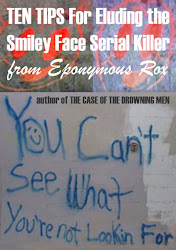 Are you a young, athletic male, between the ages of 17 and 30, with plans for a night out on the town? Then this 'Smiley Face Killer' survival guide is required reading. Why? Because you match the victim profile. (Read it here for FREE...and be safe.) 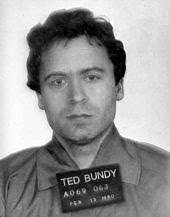 'Profile of a Serial Killer' 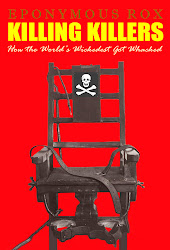 HOW THE WORLD'S WICKEDEST GOT WHACKED: Famous last meals, last words, and last moments of America's most infamous criminals